Last week I made a new release of the Quake-III-Arena-Kenny-Edition project. The major feature of this release is Vulkan rendering support. Here I present some summary information. 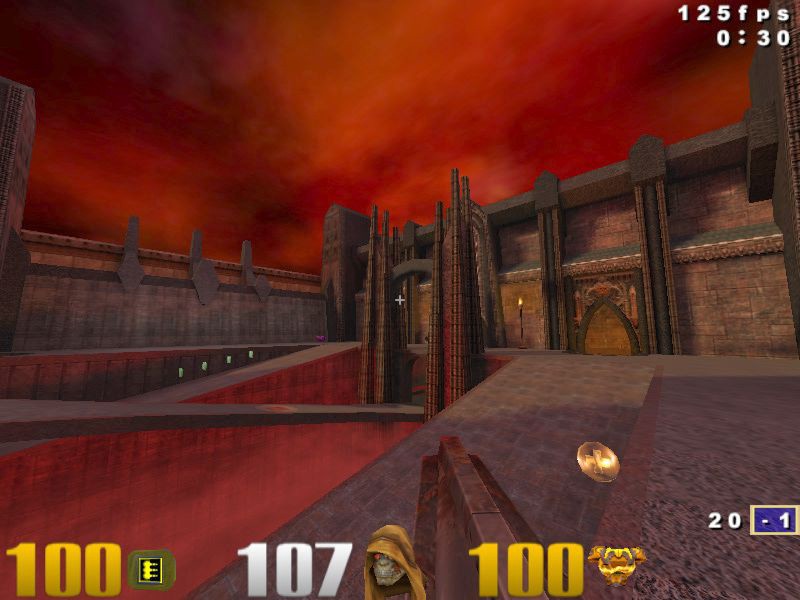 Geometry. Quake 3 renderer prepares geometry data for each draw call in tess.xyz and tess.indexes arrays. OpenGL backend calls qglDrawElements to feed this geometry to the GPU. Vulkan backend appends this data to geometry buffers that are bound to host visible memory chunk. At the end of the frame when command buffer is submitted to the queue the geometry buffers contain all the geometry data to render the frame. Typically up to 500Kb of vertex data is copied to the vertex buffer and up to 100Kb of index data is copied to the index buffer per frame.

Pipelines. Standard pipelines are created when renderer starts. They are used for skybox rendering, fog/dynamic light effects, shadow volumes and various debug features. Map specific pipelines are created as part of parsing Q3 shaders and are created during map load. For each Q3 shader we create three pipelines: one pipeline to render regular view and two additional pipelines for portal and mirror views.

Shaders. Emulate corresponding fixed-function functionality. Vertex shaders are boring with the only thing to mention that for portaled/mirrored views we additionally compute distance to the clipping plane. Fragment shaders do one or two texture lookups and modulate the results by the color.

Draw calls. vkCmdDrawIndexed is used to draw geometry in most cases. Additionally there are few debug features that use vkCmdDraw to convey unindexed vertexes.

vk.h provides interface that brings Vulkan support to Q3 renderer. The interface is quite concise and consists of a dozen of functions that can be divided into 3 categories: initialization functions, resource management functions and rendering setup functions.

We have 13 functions in total to provide foundation necessary to fuel full-featured Q3 Vulkan backend.

One of the goals of the entire project is to preserve original look and feel and gameplay of the original Quake III Arena. On the graphics side this means that Vulkan backend should provide the same output as native OpenGL-based.

The tool that I used to compare the outputs from both backends is a twin mode that can be enabled by the r_twinMode cvar. In this mode the renderer creates two windows that display both OpenGL and Vulkan outputs side-by-side.

Quake 3 is one of my favorite games and I had a very positive experience working with its code. Q3 codebase is of high quality. Its complexity corresponds to the provided functionality.

Vulkan is good. I like its explicit nature — if you have to do something it’s hard to forget to do this. Validation layers is a great example of how to write good warning/error messages. Also I don’t remember if I had a black screen at some point (remember OpenGL?). On the other side I had to restart my PC several times (AMD drivers) when validation layers did not catch invalid call. Thin drivers?